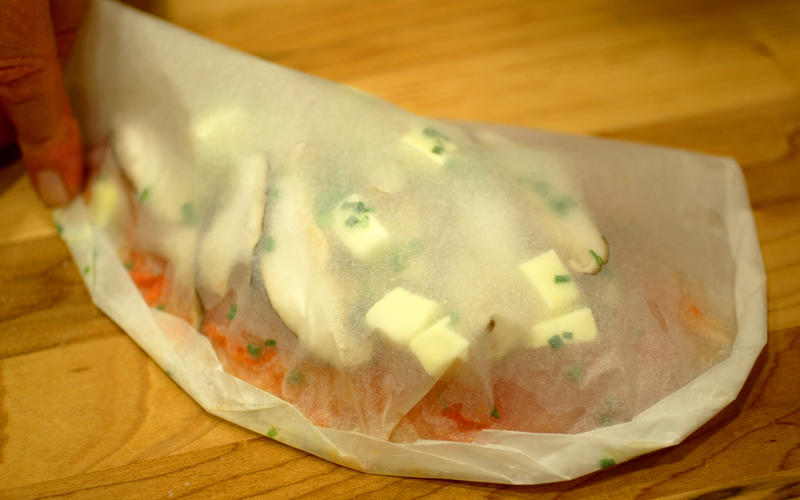 Step 1 Heat the oven to 400 degrees. Begin the parchment packets: Take 4 large (14-inch-square) pieces of parchment paper and fold each in half. With scissors, cut each in the form of a paper heart exactly the way you did in kindergarten.

Step 2 Shred the carrot using a medium-size grater into a work bowl. The shreds should not be too fine or they'll melt away to nothing. Shred the turnip in the same way into the same bowl. Season with salt and stir to mix well. Squeeze out any excess liquid if any accumulates in the bottom of the bowl.

Step 3Slice the mushrooms as thin as possible. Season the filets with salt.

Step 4Unfold each heart and lightly butter one-half of the parchment. Arrange the carrot and turnip in the center, forming mounds roughly the same size and shape as the filets.

Step 5Place a filet on top of each mound. Divide the sliced mushrooms among each packet and arrange on top of the filets. Drizzle each with 2 tablespoons of white wine, dot with 2 teaspoons of butter and scatter 1 teaspoon of snipped chives over the top of everything. Season with salt.

Step 6Close the heart by folding the other side over top. Beginning at the top of the heart, fold a short (1- to 1 1/2-inch) section of paper over twice, overlapping each fold in the same way you would crimp a pie crust. When you've gotten to the very tip, fold it over several times to seal to make a tight package. Repeat for the remaining 3 packets. (The recipe can be prepared to this point up to 4 hours ahead of time and refrigerated until ready to bake.)

Step 7Place the packages on a jellyroll pan and bake until they are fragrant and slightly puffed, 15 minutes. Remove from the oven and place each paper bag in the center of a serving plate. Serve immediately, letting each person slit open the bag to get the full aroma.