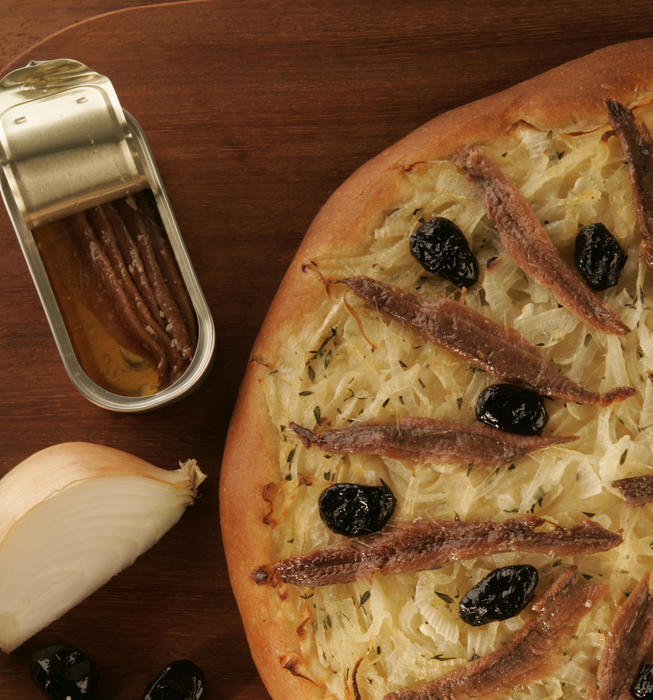 Step 1 For the dough, place three-fourths cup warm water into a mixing bowl, sprinkle the yeast over and stir until dissolved. Using a wooden spoon, stir in the sugar, the kosher salt, one-fourth cup oil and the flour; mix until very smooth. Lift the dough from the bowl and knead lightly on a lightly floured board about 15 times.

Step 2 Place the dough in an oiled mixing bowl, turning to coat the dough with oil on all sides. Cover with a damp dish towel and place in a warm spot. Let stand until the dough is doubled in bulk, 1 to 1 1/2 hours.

Step 3While the dough rises, heat the remaining 2 tablespoons oil in a deep saute pan over medium-low heat. Add the onions and sprinkle with the sea salt. Cook, stirring often, until very soft but not browned, about 20 minutes. Add the thyme, mix well and remove from heat. Cool.

Step 4Heat the oven to 425 degrees. Punch the risen dough down. Transfer to a baking sheet and, with lightly floured hands, press out smoothly and evenly into an oval roughly 9 by 11 inches. Cover with a damp towel and let rise 15 minutes.

Step 6Bake 25 to 30 minutes, until dough is lightly browned and done in the center. Cool slightly before cutting.