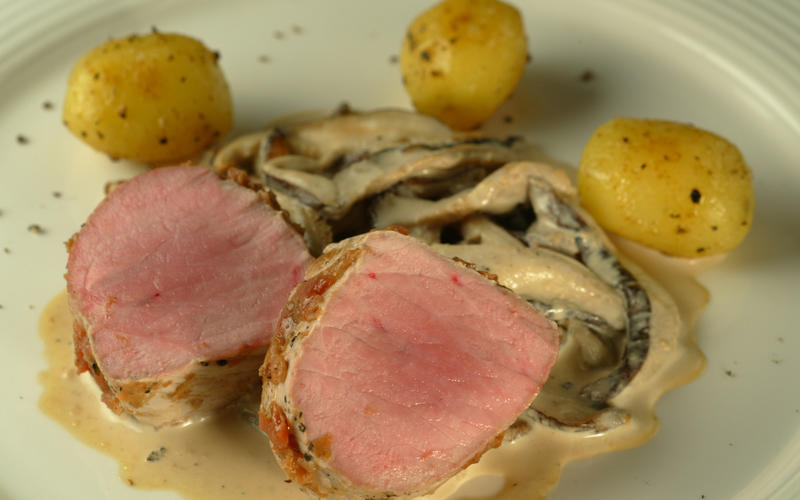 Step 1 In a large stockpot, heat 1 gallon of water to barely simmering, 170 degrees. It's important not to let the water exceed a bare simmer at any time -- it should resemble steamy bathwater, with no bubbles breaking the surface. Add cold water or adjust the flame to maintain the proper heat.

Step 2 In another pot, boil the potatoes in salted water until knife tender. Peel and set aside.

Step 3Remove the plum meat from the seeds of the umeboshi. Discard the seeds. Chop the umeboshi to a paste consistency.

Step 5Cook the tenderloin in the 170-degree water until the meat is firm to the touch, about 15 to 16 minutes. Remove the meat from the water and let it rest for 2 minutes. Snip one end of the roll and remove the plastic wrap. Slice the tenderloin roll into

Step 61-inch pieces and set aside.

Step 7Melt 1 tablespoon of the butter in a large skillet. Add the mushrooms and cook just until soft. Season with pepper and salt. Remove the pan from the heat and add the Madeira. Reduce until the liquid is almost gone, then add the cream. Cook until it thickens slightly.

Step 8In another skillet, melt the remaining 1 tablespoon butter. Add the peeled potatoes and salt and pepper to taste.

Step 9To serve, place the shiitake mushroom slices in the middle of each plate. Place two slices of pork on the mushrooms and arrange the potatoes on the side.