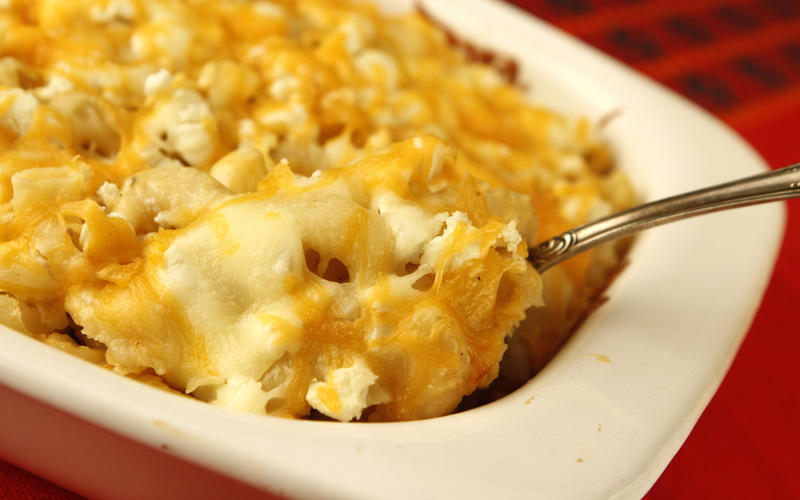 Step 1 Heat the oven to 350 degrees. Cook the macaroni according to the instructions on the package until al dente. Drain.

Step 2 While the noodles are cooking, in a large bowl, whisk together the eggs, salt and pepper. Whisk in the sour cream and melted butter.

Step 3Stir the macaroni into the bowl with the egg mixture and set aside.

Step 4In a large saucepan, heat the Velveeta, cream of mushroom soup and the milk over medium heat and cook, stirring frequently, until the Velveeta is melted and incorporated with the soup and milk to form a nice sauce consistency. Add additional milk to thin if the sauce is too thick. Remove from heat.

Step 5Stir the sauce in with the macaroni, then stir in half (1 cup each) of the cheddar and jack cheeses. Place the macaroni mixture into a greased 13-by-9-inch baking dish.

Step 6Spoon the goat cheese in dollops over the macaroni mixture, then sprinkle over the remaining cheddar and jack cheeses.

Step 7Bake until the cheese topping is melted and the sauce is bubbly, about 30 to 40 minutes. Remove and cool slightly before serving.