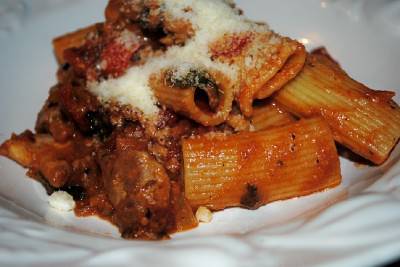 Char the red peppers over an open flame or under a hot broiler. If broiling, leave the oven door ajar to allow some of the steam to escape. Place the charred peppers in a bowl, cover with plastic wrap and cool. Peel and seed the peppers, then quarter lengthwise. Slice and reserve.


Bring a large pot of water to a boil for the pasta.


Heat 1 tablespoon EVOO, one turn of the pan, in a skillet over medium-high heat. Season the chicken liberally with salt and pepper, then add the chicken pieces to the skillet in a single layer. Brown evenly on both sides, 5-6 minutes total, then remove to a plate.


To the skillet, add the remaining EVOO, three turns of the pan, then the mushrooms. Brown the mushrooms for 5-6 minutes, then add the onion, garlic, cubanelle peppers and chili peppers. Season with salt and pepper and sauté to soften, 6-7 minutes more. Deglaze the pan with the Marsala or sherry, then add the tomatoes and break them up with a spoon or masher. Reduce the heat to medium-low to simmer. Add the torn basil leaves, reserved sliced roasted peppers and the chicken back to the skillet and stir in the half-and-half or cream. Let the sauce thicken while the pasta cooks.


When the water is boiling, add salt and the rigatoni and cook the pasta to al dente. Reserve a cup of the starchy cooking water to toss with the pasta sauce just before draining.

Toss the chicken with the “riggies” and use a splash or two of the starchy water as needed to combine. Toss in a little cheese, then serve in shallow bowls. Pass more cheese at the table.