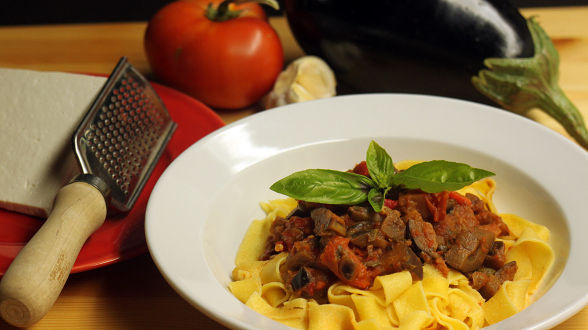 Quarter the eggplant lengthwise, then slice 1/4- to 1/2-inch thick. Salt and drain in a colander for 30 minutes; press out the excess liquid.

Broil the peppers to char the skins and let cool in a covered bowl. Peel and seed the peppers and coarsely chop. If you have a gas stove, the peppers can be charred over an open flame.


Bring a large pot of water to a boil for the pasta.


Heat a large pot over medium to medium-high heat with olive oil, four turns of the pan. When the oil is hot, add the anchovies and stir until they melt into the oil. Add the garlic, chili pepper or flakes and the eggplant; stir to combine and partially cover the pan to sweat it for a few minutes until light brown at the edges. If using fresh tomatoes, add them to the pan and cover the pan tightly; shake every few minutes until the tomatoes burst. If using canned tomatoes, hand crush and add to the eggplant along with the juice. Stir in the basil, parsley, chopped peppers and capers, and season with salt and pepper, to taste.


Serve in shallow bowls immediately or top with a little cheese, if you like. (Rach says, “We usually skip cheese for dishes that include anchovies but I am a sucker for ricotta salata on this one!”)