Sliced Steak with Horseradish Gravy and Potato and Watercress Hash 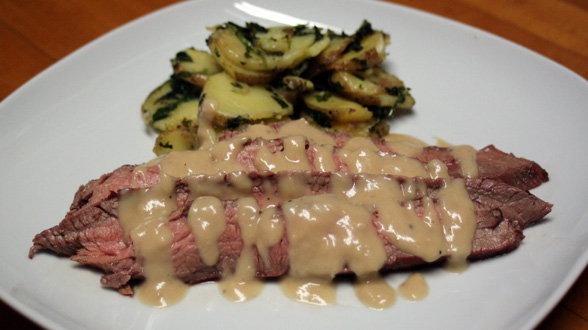 In a large, nonstick skillet, heat 2 tablespoons EVOO, two turns of the pan, over medium-high heat. As the EVOO heats up, slice the potatoes as thin as possible and combine with the shallot. Arrange the shallot and potatoes in a single layer in the hot skillet and season with salt and pepper. Cook for 5-6 minutes, turn and season the flip-side of the potatoes, then cook for 3-4 minutes more. Add the watercress to the pan, turn and toss with the crispy potatoes. Sprinkle a little nutmeg over the hash, to taste.

While the potatoes cook, season the steaks with salt and pepper and add to the hot cast-iron skillet. Cook for 10 minutes, turning once for rare to medium-rare and up to 16 minutes for medium-well doneness. Remove the meat from the skillet and let rest for 10 minutes before slicing. Meanwhile, reduce the heat under the skillet a little and add the butter to melt. Whisk in the flour, cook 1 minute, then whisk in the stock, Worcestershire sauce, horseradish and cream. Season with pepper.

Slice the steak against the grain. Serve 6 ounces or half of a sliced steak per person topped with the gravy. Serve the hash alongside.


This is one of many “Yum-o!” recipes – it’s good and good for you. To find out more about Yum-o!, Rachael’s nonprofit organization, go to www.yum-o.org.