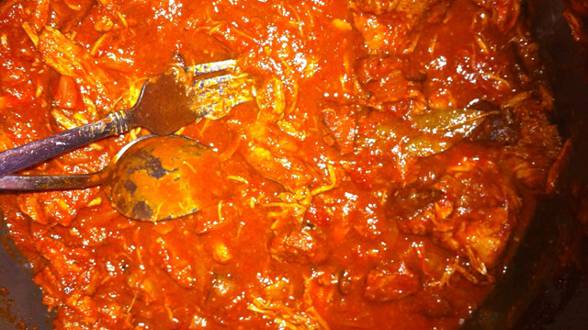 Turn the broiler on high.

Arrange 12 of the hot peppers and all of the sweet peppers on a baking sheet and char evenly all over – keep the oven door slightly ajar to allow steam to escape. Place the charred peppers in a bowl and cover with plastic wrap. Let cool, then peel, seed and slice.

Turn off the broiler and pre-heat the oven to 325°F.


Butterfly the pork shoulder open and flatten it out.


Place the lemon juice and about 1/4 cup EVOO in a food processor. Coarsely chop the remaining red chili pepper and add it to the processor bowl with the garlic, bay leaves, rosemary, thyme and parsley. Pulse-chop into a thick, pesto-like sauce.


Heat a large Dutch oven over medium-high heat and brown the meat all over. Remove the roast; add the onions and wine to the pot and stir to deglaze. Add the stock, set the meat back in the pan, pour the tomatoes over the top of the meat and lightly crush them with your hands, arranging the tomatoes over meat. Cover the pan and roast for 2 hours. Switch on the broiler, uncover and broil to brown the tomatoes a bit. Remove from the oven and let rest for 30 minutes.

While the meat rests, bring a few inches of water to a boil. Salt the water and parboil the broccoli rabe, 3-4 minutes. Cold shock and drain well.


Shred the pork, place it in a dish, then strain or mill the sauce and pour it over top. Warm through when ready to serve.


Split the rolls and cover with cheese; broil to melt. Top the cheese with the rabe and peppers, then cover that with hot juicy pork and serve.