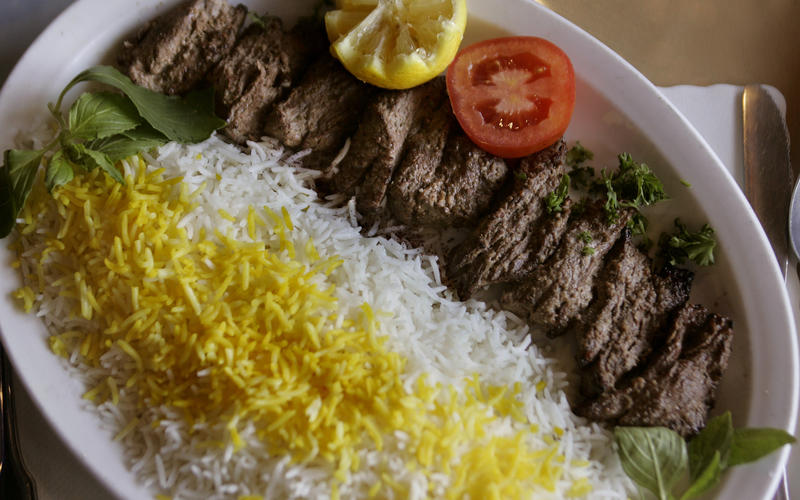 Step 1 Cut the onion into chunks and puree in a blender or food processor, adding 1 tablespoon of water if necessary to make a smooth puree. Strain the onion through a fine sieve. Discard the solids and reserve the onion juice.

Step 2 Slice the beef horizontally into two long strips, then cut it crosswise into 12 roughly equal rectangles. Lay one rectangle on a cutting board that has been wetted so the meat will stick. Hold the meat down with the palm of one hand. Using a very sharp knife, make a cut parallel to the cutting board one third of the way from the top of the meat, going from one end nearly to the other but not cutting the meat into two pieces. Rotate the piece of meat and make a similar cut a third of the way up from the bottom of the meat. Unfold the meat into 1 long slice. Repeat with the rest of the meat.

Step 3In a medium nonreactive bowl combine the pomegranate juice or molasses, walnuts, salt, pepper and onion juice. Add the meat and rub in the marinade. Cover and marinate in the refrigerator for 24 hours.

Step 4Thirty minutes before cooking, remove the meat from the refrigerator. Wipe the excess marinade off the meat. Insert a skewer through one end of each strip and poke the skewer in and out of the meat so the strip will stay flattened out.

Step 5Grill 2 minutes on the first side, then turn and grill on the other side for a total of 4 to 5 minutes for medium rare. Serve with plain rice pilaf and quartered limes.