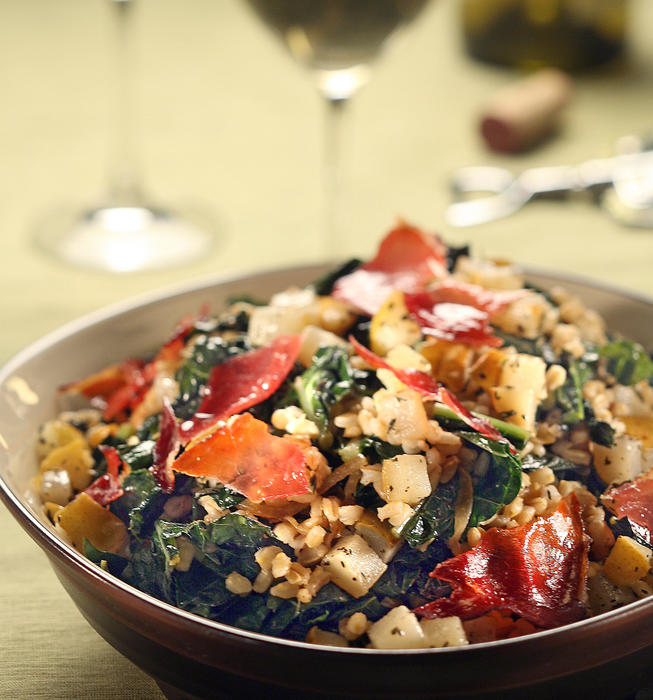 Step 1 Preheat the oven to 425 degrees. In a large bowl, gently toss the pears, 1 tablespoon oil, 1 teaspoon thyme, one-fourth teaspoon salt and several grinds of black pepper. Spread out the pears in a single layer on a foil-lined baking sheet and roast, turning occasionally, until golden brown and fragrant, about 25 minutes. Remove and allow to cool.

Step 2 On a large, parchment-lined baking sheet, arrange the prosciutto slices, making sure they do not touch. Sprinkle the sugar evenly over the slices. Bake the prosciutto until the slices are caramelized and glossy, 8 to 10 minutes. Rotate the tray while baking for even coloring, and watch toward the end of baking that the sugar does not burn (it burns quickly). Remove and allow to crisp and cool completely.

Step 3Bring a large pot of salted water to a boil. Add the barley and cook, stirring occasionally, until tender, about 30 minutes; drain well.

Step 4Meanwhile, heat the remaining 2 tablespoons oil in a large skillet over medium-high heat. Add the onion, one-fourth teaspoon salt and several grinds of pepper and cook, stirring often, until golden brown, about 10 minutes. Remove the pan from heat and stir in the wine, then return the pan to medium-high heat. Cook until most of the wine is absorbed, about 2 minutes, stirring often and removing any bits of flavoring from the bottom of the pan. Stir in the kale and season with one-half teaspoon salt and one-eighth teaspoon pepper. Cover and cook for 2 minutes until the kale is just wilted and a vibrant green. Stir again, reduce the heat to medium-low, cover and cook until the kale is tender, an additional 5 minutes. (Recipe can be prepared to this point up to 24 hours in advance; store the barley and kale mixture separately, tightly wrapped and refrigerated; store the prosciutto in a sealable plastic bag at room temperature.)

Step 5In a large bowl, combine the barley with the lemon juice, butter and remaining thyme. Stir in the kale. Gently stir in the pears and hazelnuts if using and check seasoning. Spoon salad onto a serving platter; crumble the candied prosciutto over the top before serving.